In a wooden barn perched on a grassy hill, some of the most celebrated cows in the dairy business — the bovine royal family of American fancy butter — sampled hay in their new abode.

Diva, the bossiest of the group, hovered regally over the shy, gentle Cinnamon. Lying down were Ruby and Lacy, who were chewing cud over their folded forelegs. Rutabaga, May and Patch ruminated impassively as Dell peed, effusively, in greeting.

A few months earlier, in February, the herd’s former owner, Diane St. Clair, loaded them onto a trailer and drove them 7 miles down the road from her Animal Farm Creamery in Orwell, Vermont, to Rolling Bale Farm in Shoreham, a 100-acre organic property nestled into a clearing about an hour south of Burlington.

“That was a hard day,” St. Clair said. “But there was no way for me to continue.”

St. Clair had spent the previous 22 years making the most sought-after small-batch cultured butter in the United States. It’s the same butter that the chef Thomas Keller serves at the French Laundry and Per Se — and that retails for an eye-popping $60 per pound.

But at 65, she was ready to retire. Decades of twice-daily milking, barn mucking and hoisting 70-pound jugs of fresh milk into the butter churn had taken a toll on her back. Her husband, Al Clarisse, a large-animal veterinarian who was her only helper, had developed knee problems. And although her heart still clung to her cherished Jersey cows (her “other family,” as she called them), her creative urges had shifted from butter to a new, more sedentary, but just as aromatic, passion: blending exclusive perfumes.

The question was, would she be able to find the right people to take on her treasured herd and her churn? Or would her extraordinary butter, with its subtle nutty, grassy flavors that changed with the seasons, simply disappear?

For many small dairies in Vermont, retirement can be a heartbreaking matter of selling off cows and equipment to large agribusinesses and calling it quits. In 1969, Vermont had 4,017 dairy farms, most of them small, family-run operations. By 2020, that number had dropped by 84% to 636, with many having consolidated to benefit from economies of scale.

Happily, St. Clair’s story is a rare piece of good news in the world of small dairies. It’s an example of how one single-minded, cow-loving farmer was able to create a market for the kind of handmade cultured butter that had nearly gone extinct in the United States. Then, through a combination of resolve and serendipity, she was able to pass that business to a young family with exactly the right kind of grit, experience and disposition to carry it on. And they happened to live just down the road.

When St. Clair started Animal Farm in 1999, she knew she wanted to raise Jersey cows. With them came a seemingly endless river of milk that needed a purpose.

“Everyone else in Vermont was doing cheese,” St. Clair said, “I saw a niche with butter.”

Specifically, the kind of tangy, high-fat, marigold-colored butter she’d eaten in Europe, for which the ultra-creamy milk her Jersey cows produced was perfectly suited. (Most dairy cows in the United States are Holsteins, which yield a larger quantity of milk with a lower fat content.) 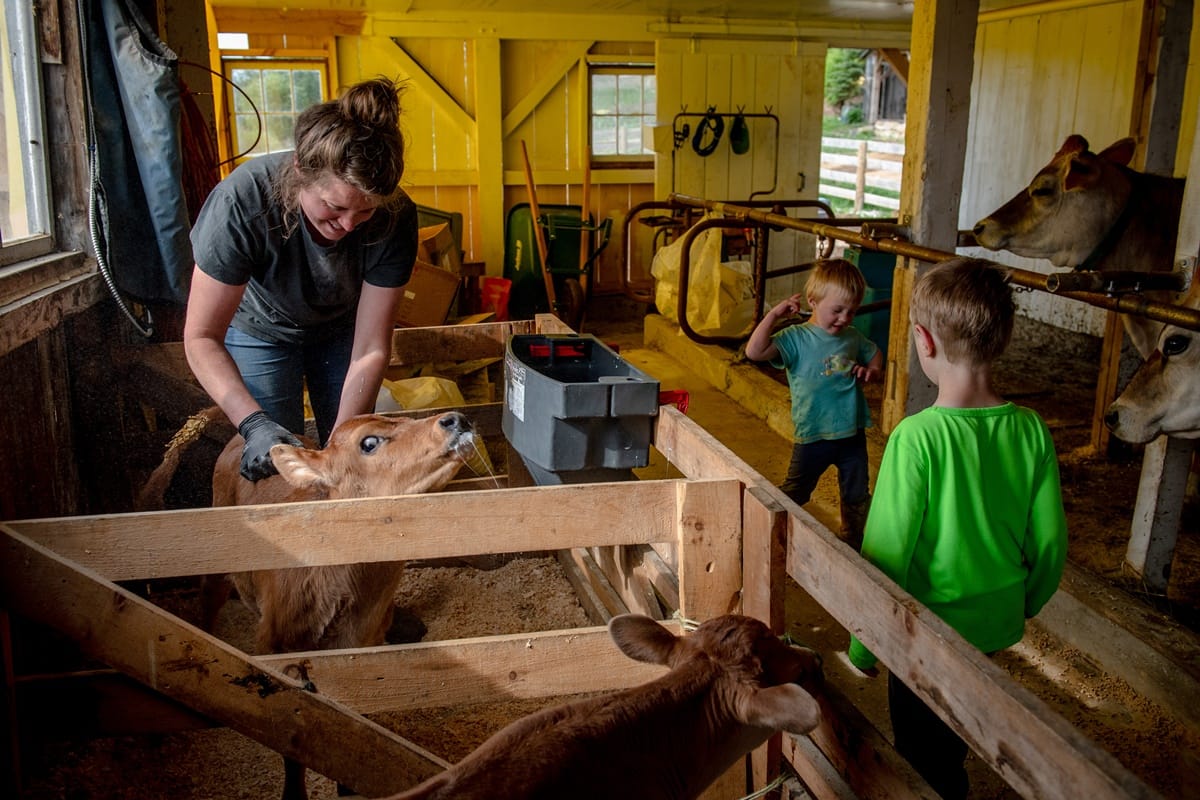 Back then, no one she knew in the United States was making small batches of European-style butter from their own cows, and there were no guidelines for how to do it. The nearby Vermont Creamery had started making European-style butter a year earlier, in 1998, but from purchased milk, which, like making wine from purchased grapes, puts the agricultural part of the equation out of the producer’s control.

Relying on out-of-print dairy manuals from the 19th century, she eventually figured out that culturing the cream before churning it, a process also called clabbering, vastly improved both the taste and the texture, making the end result thicker and more pliant, and adding a pleasing nuttiness.

Once St. Clair was satisfied with her experiments, she overnighted a sampler 3,000 miles away to a famous chef she’d never met, along with a handwritten letter requesting his feedback.

“Diane sent me five little knobs of misshapen butter in a Ziploc bag,” he said. “I called her immediately and said, ‘How much do you make? We’ll buy it all.’”

Eventually, she built a small dairy near the barn, brought in a few more Jersey cows and, still working mostly by herself and by hand, increased production to 100 pounds of butter per week and the plush, lightly sour buttermilk that was its byproduct.

This was the business she had needed to sell. Ben and Hilary Haigh, both 33, of Rolling Bale Farm turned out to be the ideal buyers.

Greener Pastures for a Cherished Herd

Hilary Haigh has always been “a little obsessed with butter,” she said.

When she was studying animal science at the University of Vermont, her brother gave her a countertop butter churn, which she used for years before switching to a food processor when she and Ben married.

When she and Ben Haigh heard that St. Clair was looking for buyers, they sent her a handwritten letter expressing their interest.

It reminded St. Clair of the letter she’d sent Keller all those years ago.

After piecing together two loans and a grant to come up with the $281,000 necessary to buy the business and install a dairy at Rolling Bale Farm, the Haighs took over Animal Farm Creamery in January. (St. Clair wanted to retire on her farm, so the business and cows were sold, but not her property.)

Now, several times every week, Hilary Haigh makes butter and buttermilk exactly as St. Clair taught her: by hand, by herself, in a dairy built on the same pasture where the Haighs’ herd grazes, but with the addition of her two young sons tumbling underfoot, eating as much butter and cream as they can get their small hands on.

St. Clair misses her cows. But she’s happy to have the time to immerse herself in orris root, ylang-ylang and the other heady tools of perfumery needed for St. Clair Scents.

And Diva, Cinnamon, Dell and the rest of the herd seem to have fully adapted to their new home.

She paused and added, a little wistfully, “They’re doing fine without me.”

1. Make the dressing: Put avocado, buttermilk, lemon juice, anchovy, scallions, garlic, parsley, chives, tarragon, olive oil and basil in a food processor or blender, and process until smooth and uniformly green, 1 to 2 minutes. Taste and season with salt and black pepper. Set aside.

2. Make the slaw: In a large bowl, combine cabbage, scallions, jalapeño and cilantro. Pour 1 cup of green goddess dressing over slaw and toss well to coat. Season with salt and pepper.

3. Garnish with more cilantro before serving. Serve immediately, or cover with plastic wrap and refrigerate for a couple of hours. Toss again before serving, adding more dressing if you like. Leftover dressing will keep for another day or two in the fridge.

1 to 2 tablespoons buttermilk or whole milk, plus more as needed

1. In a large bowl, stir together flours, cornstarch, baking powder and salt.

2. In an electric mixer fitted with the paddle attachment, beat together butter and granulated sugar until lightened in color and fluffy, 3 to 4 minutes. Beat in egg yolk and almond extract until combined, about 20 seconds. With the mixer running on low, add flour mixture, beating until just incorporated. Do not overmix.

3. Divide dough into two balls. On a floured surface, roll each ball into a 1 1/2-inch-thick log. (If the dough is too soft to work with, chill it for 20 to 30 minutes before forming it into logs.) Wrap logs tightly in parchment paper or plastic wrap, and refrigerate until very firm, at least 2 hours or overnight.

4. When you are ready to bake the cookies, heat oven to 325 degrees. Line 2 baking sheets with parchment.

6. Bake until cookie edges and bottoms are golden brown, about 15 to 22 minutes. Cool 5 minutes on baking sheets, then transfer to a wire rack to cool completely.

7. Make the icing: In a large bowl, whisk together powdered sugar, melted butter, 1 tablespoon buttermilk, vanilla and almond extracts. If the icing isn’t thin enough to drizzle, add more buttermilk. It should be a little thicker than heavy cream.

8. Using a fork, drizzle icing all over the cooled cookies, then top with almond slices if you like. Let the icing set for at least 1 hour, then store at room temperature in an airtight container. The cookies will keep for at least 3 days.

Tip: If you can’t get salted cultured butter, substitute regular butter, adding an extra 1/4 teaspoon salt. The cookies will still be delicious.