Home Lifestyle Behind the Art: Is Vincent van Gogh’s ‘The Red Vineyard’ the only...

Vincent van Gogh is a Dutch Post-Impressionist painter and well-proclaimed artist who posthumously became one of the most famous and influential figures in Western art history. In over a decade, he created about 2,100 artworks, including around 860 oil paintings and several hundreds of sketches. Yet he only managed to sell one painting during his lifetime — The Red Vineyards at Arles, for a mere 400 francs (about $2,000 today) at a Brussels exhibition in March 1890, four months before his suicide. The painting now resides in The Pushkin State Museum of Fine Arts in Moscow, Russia. But, how did it end up being there and what is so special about it? Is it the only painting sold by Van Gogh before his death?

The story behind the art

The story goes as follows: Van Gogh came across a vineyard on an afternoon walk with his painter friend Paul Gauguin on October 28, 1888. He later described the scene to his brother Theo in a letter saying, “A red vineyard, completely red like red wine. In the distance it became yellow, and then a green sky with a sun, fields violet and sparkling yellow here and there after the rain in which the setting sun was reflected.”

Van Gogh was so moved by the scene he saw that he decided to paint it in his studio using his imagination. Gauguin played a vital role in influencing Van Gogh’s style of painting. He encouraged him to make his pictures more creative using bright colours and less realistic looking. His use of colours in his painting is extreme and harsh. The vines are much redder than one would expect and on the right of the composition, what might appear as a river is a road, glistening wet after recent rain. He uses different shades of yellow to portray the huge sun in the sky, producing an eerily yellow sky. The brightness of the colours has, of course, faded over time. The original painting would have been even more dramatic. Recent analysis has shown that Van Gogh made several changes to the painting — one of which is that the man standing on the road in the upper right was originally a woman dressed in a skirt, white blouse and hat. The woman on the far right, by the edge of the road, wears the traditional costume of Arlésiennes, the famed woman of Arles. Analysts suggest she represents Van Gogh’s friend Marie Ginoux who, with her husband, ran the Café de la Gare, just a few doors from the Yellow House, the artist’s home and studio. 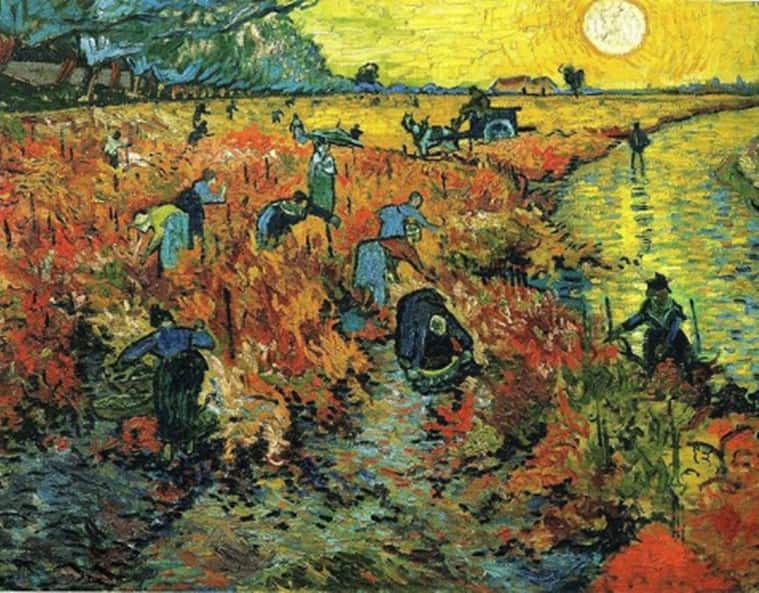 His use of colours in his painting is extreme and harsh. The vines are much redder than one would expect and on the right of the composition, what might appear as a river is a road, glistening wet after recent rain. (Photo: Instagram/@trt2)

The journey to Russia

The Red Vineyards at Arles has an interesting travel history. In April 1889, Van Gogh sent his painting to his brother Theo, who then resided in Paris. It is said it was a wedding gift for his brother and his bride Jo Bonger. A few months later, however, Van Gogh asked his brother to dispatch the painting to Brussels, where the artist was given the opportunity to exhibit a few paintings at an event organised by the group Les Vingt in January 1890. It was then that the Belgian painter Anna Boch bought it and kept it until 1907. Two years later, the painting was acquired by a Moscow collector and textile factory owner Ivan Morosov. The price had risen to 30,000 francs from 400 francs — an indication of Van Gogh’s rising popularity. Morosov’s collection was nationalised in 1918. In 1948, The Red Vineyards at Arles was among the works transferred to the Pushkin Museum.

Did Vincent van Gogh just sell one painting in his lifetime?

For such a famous painter to sell only one oil painting in his lifetime is a fact that is quite hard to believe. Although Van Gogh gained popularity after his death, he was still talked about within the art circle in Europe. The myth of only one painting being sold by him has been challenged by leading Van Gogh scholar Marc Edo Tralbaut, author of ‘Vincent van Gogh, an Authoritative and Comprehensive Biography of Van Gogh‘. Tralbaut claims Theo sold a self-portrait by the artist over a year before the sale of The Red Vineyards at Arles. Van Gogh Museum claims that the artist sold several paintings during his lifetime. Van Gogh’s uncle was an art dealer and to help his nephew’s career, he ordered 19 cityscapes of The Hague, The Netherlands. It is also said that Van Gogh traded his paintings for art supplies or food when he was young — something that is not a common practice among young artists. According to Louis van Tilborgh, chief curator at the Van Gogh Museum, the artist also mentions in his letters that he sold a portrait to someone, but it is not known which portrait.

Art dealers and analysts have had to rely heavily on the letters that Vincent van Gogh exchanged with his brother Theo. This one source has not been enough in the search for the truth behind the claim of whether he only sold one painting. It is common knowledge that not all artists thrive financially during their active years. Despite several theories surrounding the artist, his remarkable work is still valued and celebrated across the world. Millions of people visit Moscow each year just for one glimpse at The Red Vineyards at Arles painting, and this alone is proof of how art is immortal.

Next Up in Behind the Art: Why is Katsushika Hokusai’s The Great Wave off Kanagawa considered the most famous Japanese artwork?