It is a Dior versus Valentino standoff all the way. The two luxury fashion brands have locked horns, with Dior, a French label, asking to be compensated for all the sales it missed when Valentino, its Italian counterpart, conducted a couture show on the Spanish Steps in Rome, Italy and allegedly blocked access to a Dior boutique.

Just last week, Valentino’s creative director Pierpaolo Piccioli showcased his autumn/winter 2022/2023 collection on the iconic Spanish Steps, which was attended by many A-list stars such as Anne Hathaway, Naomi Campbell, Florence Pugh and Andrew Garfield, among others.

In fact, Anne Hathaway and Florence Pugh were even dressed in hot pink attire, which Piccioli had introduced as the colour ‘PP Pink’ in collaboration with Pantone during the fashion house’s previous ready-to-wear fall/winter 2022-23 collection. 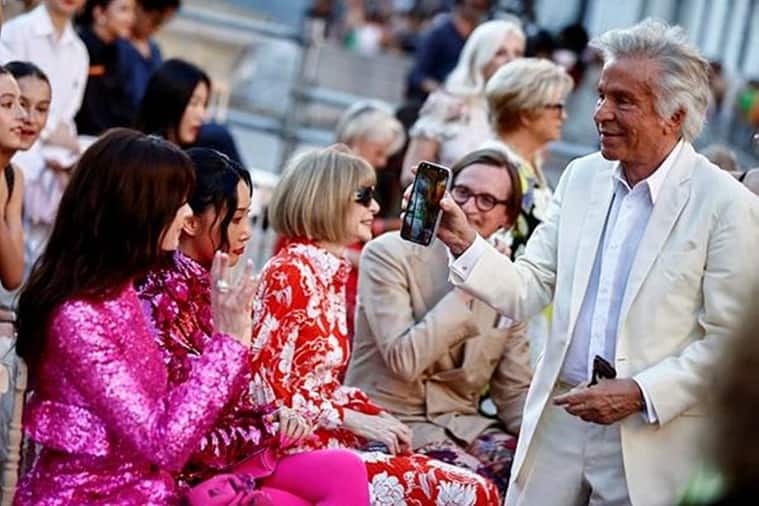 Anne Hathaway waves for a video call on a cell phone held by Giancarlo Giammetti as they attend Valentino’s “The Beginning” Fall-Winter 2022/2023 Haute Couture collection show on the Spanish Steps. (REUTERS/Yara Nardi)

Amid all the media attention the show received, there was even a complaint made by Dior, which alleged that conducting the event at the foot of the 18th-century staircase blocked access to the Dior shop on Via Condotti — a street in Rome — which faces the piazza. Fashion designer Pierpaolo Piccioli, accompanied by seamstresses, reacts at the end of Valentino’s “The Beginning” Fall-Winter 2022/2023 Haute Couture collection show on a catwalk on the Spanish Steps. (REUTERS/Yara Nardi)

A Women’s Wear Daily report states that in a “letter sent to Valentino on the night of the show by the retail manager of Christian Dior Italia”, the French brand has asked to be “compensated for the disruption caused to the Dior store”, which is located “on the corner of Via Condotti and facing the Spanish Steps”, for as much as 100,000 euros (INR 79,75,500) to be paid within 15 days. Dior claimed — as mentioned in the WWD report — access to its boutique was “hampered” and customers were “refused access and blocked at the barriers”. The store, as a result, “remained empty and could not operate from the early hours of the afternoon”. Dior alleged the problem was “amplified” with the event being scheduled on a Friday, when “surely [the] proceeds are [significant]”.

As per the letter, if the Italian brand fails to pay the amount, Dior will “adopt all the necessary measures to protect its rights”.