In Delhi’s Jawahar Bhavan, Kuldeep Kumar’s ‘Lal Quila Aur Tiranga‘ (Red Fort and the Tricolour) hangs on a panel, along with three other works of art. Something about this poem, written in Hindi, comes across as compelling. It gives a personality to the iconic Delhi monument, which has been a symbol of Mughal rule, of national pride and patriotism. Every year since India’s independence in 1947, the Red Fort witnesses the hoisting of the Tricolour by the Indian Prime Minister.

Written in a first-person account, the poem states that the Red Fort — whose construction was commissioned by Mughal Emperor Shah Jahan in the 17th century — has withstood time and many social and political upheavals, and is witnessing a new kind of transgression right now, wherein one of the colours of India’s Tricolour is bleeding into the other two. 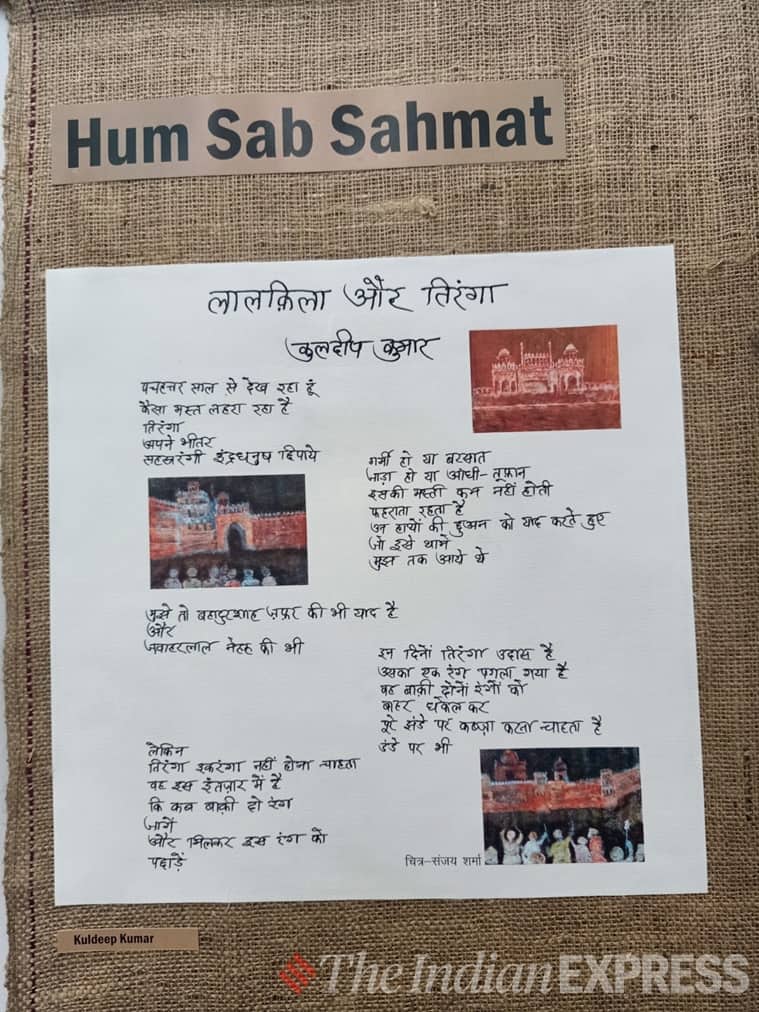 Kumar paints a haunting picture with his words and makes a smart and subtle comment on India’s current political climate without getting into the details. He tells indianexpress.com that it was a conversation he had with eminent Pakistani writer Intizar Hussain many years ago in Lahore, that inspired him to write this poem.

“In 2004, during my visit, [Hussain] had told me that Pakistan is a ‘monochromatic society’, unlike India. The word ‘monochromatic’ had stayed with me all these years,” he says, adding that India is supposed to be a secular country with many languages, religions, castes and sub-castes, and so, it is not possible to execute the concept of “one nation, one leader and one language” here.

“During the Rebellion of 1857 against the British, Bahadur Shah Zafar, a Muslim ruler who resided in the Red Fort, was declared the ‘Emperor of Hindustan’ by the masses. So, this monument has always been symbol of Indianness and oneness,” the poet and former journalist remarks.

Kumar’s poem is among the works of more than 200 artists — who have painted, written about, and photographed India in recent times — that are on display at the Jawahar Bhavan currently, as part of an exhibition titled ‘Hum Sab Sahmat: Reclaiming the Nation for its Citizens‘, organised by the Safdar Hashmi Memorial Trust (SAHMAT). 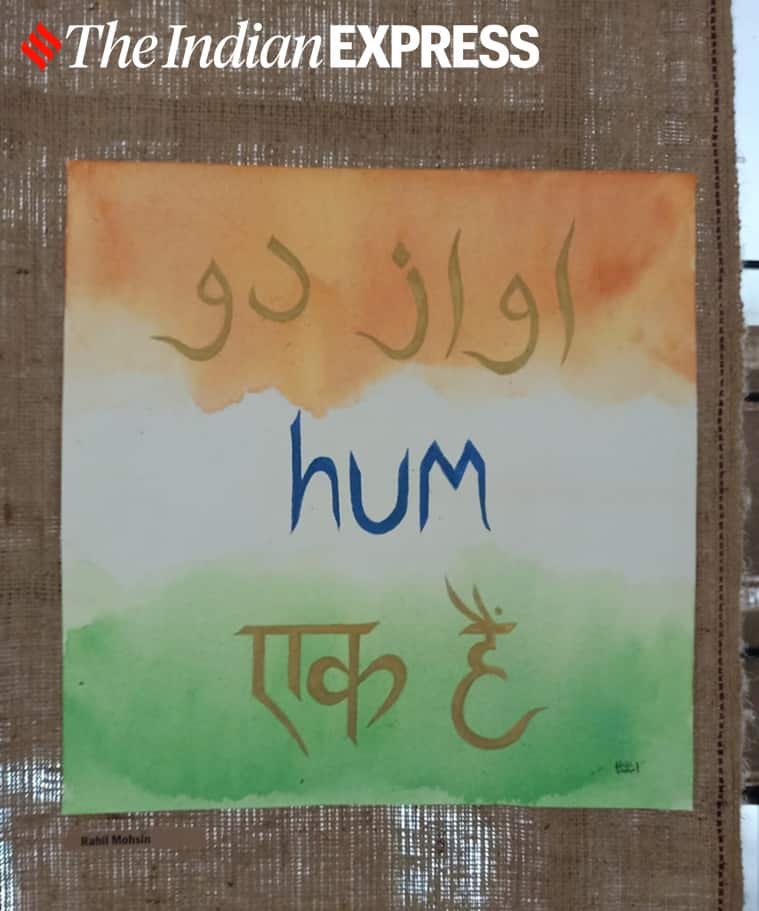 An artwork on display at the exhibition. (Express photo)

Named after Safdar Hashmi, a political activist, actor, playwright and poet, who was fatally attacked while performing a street play in Delhi’s Sahibabad in 1989, SAHMAT has been a platform for “writers, painters, scholars, poets, architects, photographers, designers, cultural activists and media persons”, who formed the Safdar Hashmi Memorial Trust/Committee within weeks of Hashmi’s death. It has since functioned to preserve the “democratic spirit of creative expression”. 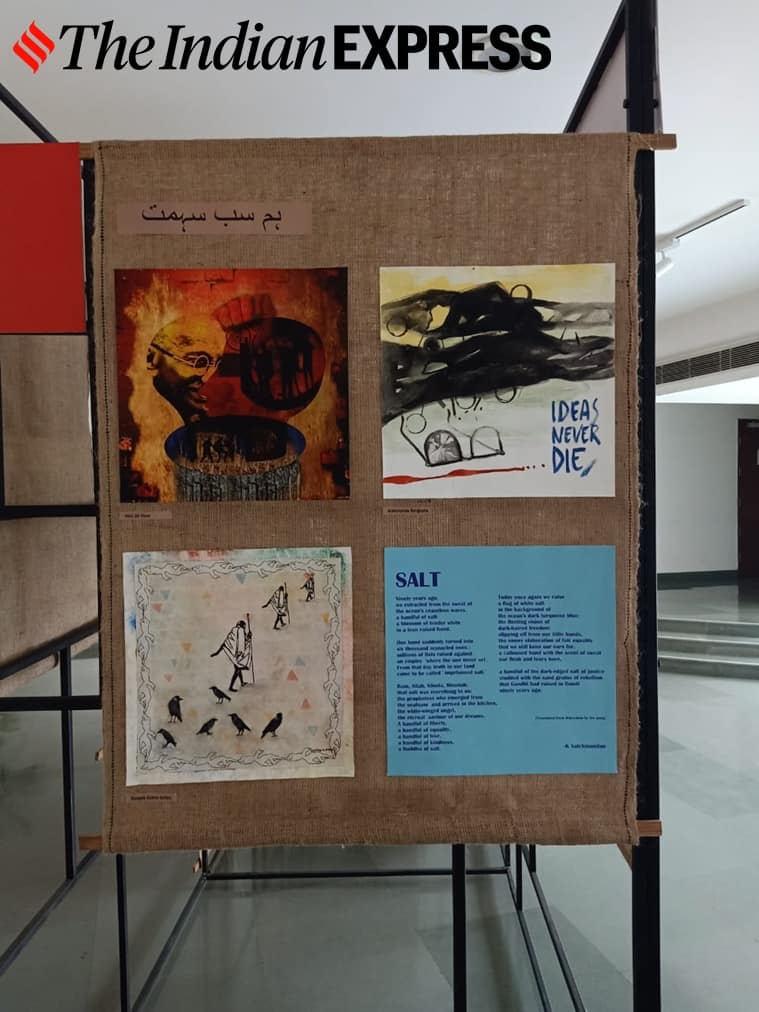 A panel on display at the exhibition titled ‘Hum Sab Sahmat: Reclaiming the Nation for its Citizens‘. (Express photo)

Aban Raza, one of the organisers whose artwork supporting the 2020–2021 Indian farmers’ protest is on display here, tells indianexpress.com that the idea was to “give a platform to thoughtful dissent”. She explains that the title ‘Hum Sab Sahmat‘ stems from an understanding that as Indians, we all realise that there is a divide, politically, at the moment, and it fuels a discord leading to us agreeing that we disagree.

According to its concept note, SAHMAT has “always spoken through its public art” and in this exhibition, there has been a “conscious effort to bring together different mediums of expression, so as to not only transcend received hierarchies of seniority or commercial success among artists, but also juxtaposing images with written texts”.

In other words, there are four artworks on display at every panel, featuring artists known and unknown, headlined by the words ‘Hum Sab Sahmat‘ in many regional Indian languages such as Bangla, Urdu, Tamil, Telugu, Malayalam, among others. 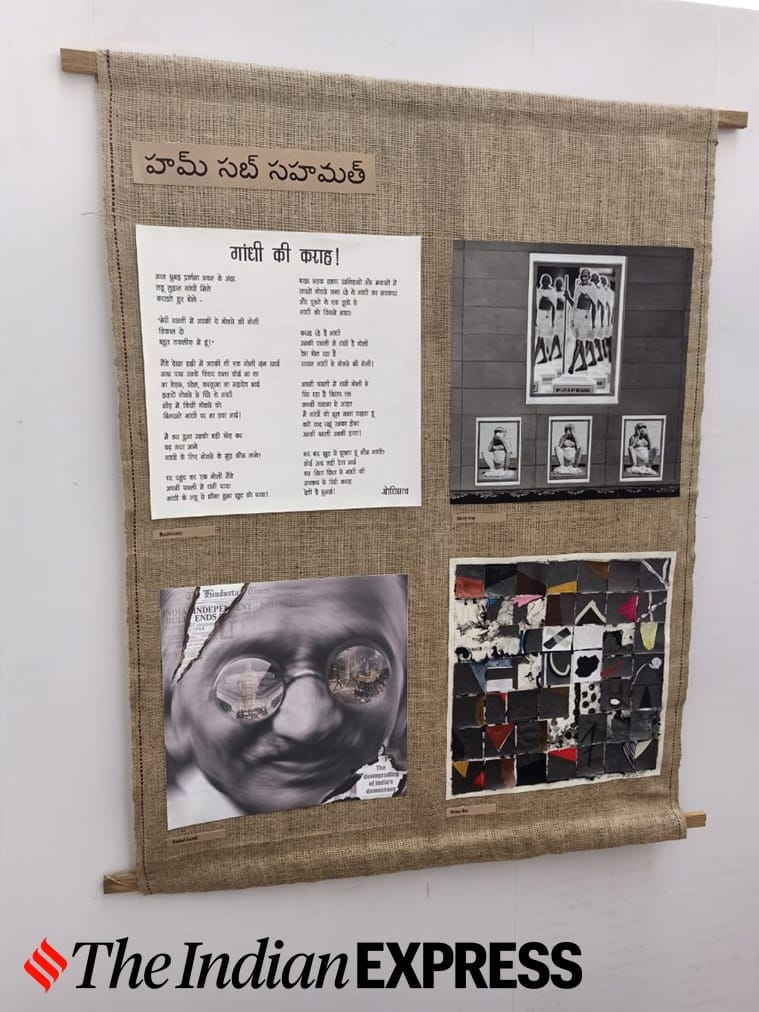 A collection of works dedicated to Gandhi. (Express photo)

While one of the panels has a collection of works dedicated to Gandhi — one of which shows a crack in his glass that reflects arson and riot — another showcases Kashmir after the abrogation of Article 370, which gave special status to the Constituent Assembly of Jammu and Kashmir for it to “recommend the extent to which the Indian Constitution would apply to the state”.

Similarly, another panel shows protests at Delhi’s Shaheen Bagh, followed by one at the Jamia Millia Islamia University in the aftermath of the Citizenship Amendment Act (Bill). 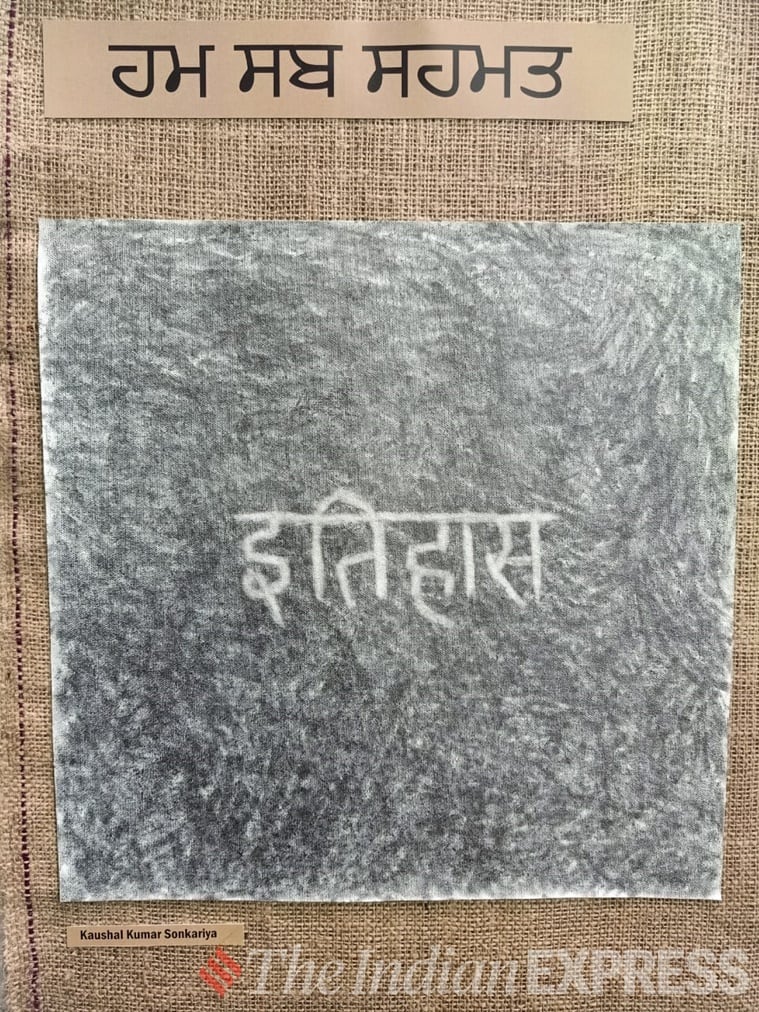 Talking about the exhibition, which celebrates 75 years of India’s independence, one of SAHMAT’s founding members Ram Rahman — a contemporary Indian photographer and curator — says that they mounted the idea of this exhibition on a similar format conceived and carried out years ago, with ‘Images and Words‘ in 1991.

“…there is going to be a ‘nationalist’ celebration under this government,” he says about the Independence Day celebrations this year. “We felt, there was a way for our artists, writers, etc., to do something which was a little more substantive and with a little more feeling. Where are we now, 75 years later? 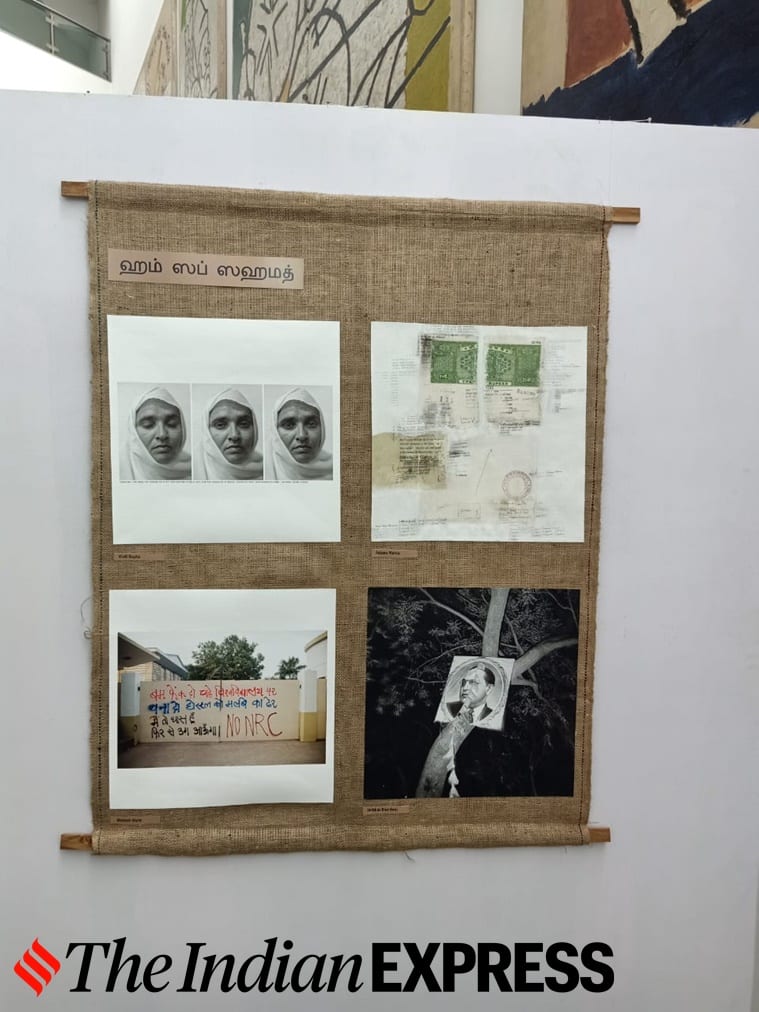 “The idea behind redoing it is that there is a whole new generation of artists and writers now; senior people who had participated all those years ago, have also participated in this. So, there is a nice link between senior artists and their younger counterparts. Our idea was to have no hierarchy,” he shares. Rahman adds that they tried to break the notion of art being a commodity, for sale in expensive galleries and for an exclusive audience. “We are lucky that we got the Jawahar Bhavan [to do this exhibition], because it is really difficult to carry out exhibitions in the current situation.

MF Husain’s birth anniversary today. One of our finest painters, ever. Immersed and deeply connected with India and all its colours. pic.twitter.com/On5CDqmvkc

“It is also nice that we did it under those historic MF Husain murals,” he says, referring to the massive works of art by the late artist, which were said to have been based on former PM Indira Gandhi, later gifted to her son Rajiv Gandhi. 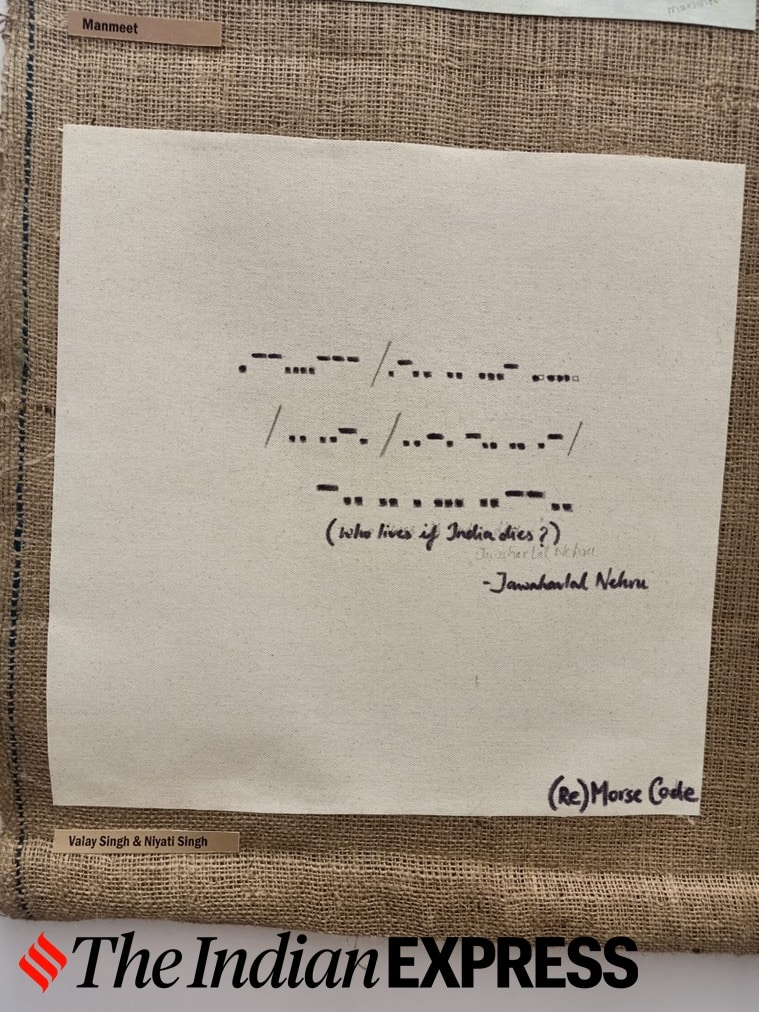 He states that the exhibition pushes the idea that as a nation, we stand together. “Ultimately, a nation is its citizens, and that is what ‘Hum Sab Sahmat‘ is — that we are all together as citizens of this independent nation,” he concludes.

The exhibition started on July 2, and will conclude on August 14, 2022. Besides the artworks, general public can also enjoy performances by leading exponents of Hindustani and Carnatic music, talks by public intellectuals, and film screenings.