Home Lifestyle On Ukraine’s front line, a fight to save premature babies

Echoing down the corridors of eastern Ukraine’s Pokrovsk Perinatal Hospital are the loud cries of tiny Veronika.

Born nearly two months prematurely weighing 1.5 kilograms (3 pounds, 4 ounces), the infant receives oxygen through a nasal tube to help her breathe while ultraviolet lamps inside an incubator treat her jaundice.

Dr. Tetiana Myroshnychenko carefully connects the tubes that allow Veronika to feed on her mother’s stored breast milk and ease her hunger.

Before Russia’s invasion of Ukraine in late February, three hospitals in government-controlled areas of the country’s war-torn Donetsk region had facilities to care for premature babies. One was hit by a Russian airstrike and the other had to close as a result of the fighting ? leaving only the maternity hospital in the coal mining town of Pokrovsk still operating.

Myroshnychenko, the site’s only remaining neonatologist, now lives at the hospital. Her 3-year-old son divides the week between staying at the facility and with his father, a coal miner, at home.

The doctor explains why it’s now impossible to leave: Even when the air-raid sirens sound, the babies in the hospital’s above-ground incubation ward cannot be disconnected from their lifesaving machines.

“If I carry Veronika to the shelter, that would take five minutes. But for her, those five minutes could be critical,” Myroshnychenko says.

Hospital officials say the proportion of births occurring prematurely or with complications has roughly doubled this year compared to previous times, blaming stress and rapidly worsening living standards for taking a toll on the pregnant women still left in the area.

Russia and Moscow-backed separatists now occupy just over half the Donetsk region, which is similar in size to Sicily or Massachusetts. Pokrovsk is still in a Ukrainian government-controlled area 60 kilometers (40 miles) west of the front lines.

Inside the hospital’s maternity wards, talk of the war is discouraged. 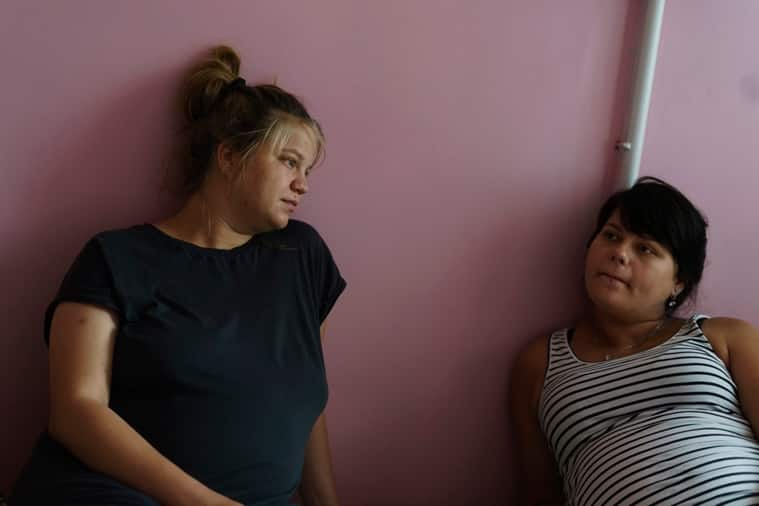 Expecting mothers Natalia Yermolovich, 35, right, sits with Viktoria Shyshkova, 23, in the room they share while being monitored at the Pokrovsk Perinatal Hospital in Pokrovsk. (AP Photo/David Goldman)

“Everything that happens outside this building of course concerns us, but we don’t talk about it,” Myroshnychenko said. “Their main concern right now is the baby.”

Although fighting in the Dontesk region started back in 2014, when Russia-backed separatists began battling the government and taking over parts of the region, new mothers are only now being kept in the hospital for longer periods because there’s little opportunity for them to receive care once they have been discharged.

Among them is 23-year-old Inna Kyslychenko, from Pokrovsk. Rocking her 2-day-old daughter Yesenia, she was considering joining the region’s massive evacuation westward to safer areas in Ukraine when she leaves the hospital. Many essential services in government-held areas of Donetsk — heat, electricity, water supplies — have been damaged by Russian bombardment, leaving living conditions that are only expected to worsen as the winter grows near.

“I fear for the little lives, not only for ours, but for all the children, for all of Ukraine,” Kyslychenko said.

More than 12 million people in Ukraine have fled their homes due to the war, according to U.N. relief agencies. About half have been displaced within Ukraine and the rest have moved to other European countries.

Moving the maternity hospital out of Pokrovsk, however, is not an option.

“If the hospital was relocated, the patients would still have to remain here,” said chief physician Dr. Ivan Tsyganok, who kept working even when the town was being hit by Russian rocket fire.

“Delivering babies is not something that can be stopped or rescheduled,” he noted.

The nearest existing maternity facility is in Ukraine’s neighboring Dnipropetrovsk region, a 3 1/2 hour drive along secondary roads, a journey considered too risky for women in late-term pregnancy.

Last week, 24-year-old Andrii Dobrelia and his wife Maryna, 27, reached the hospital from a nearby village. Looking anxious, they talked little as doctors carried out a series of tests and then led Maryna to the operating room for a C-section. Tsyganok and his colleagues hurriedly changed their clothes and prepared for the procedure.

Twenty minutes later, the cries of a newborn baby boy, Timur, could be heard. After an examination, Timur was taken to meet his father in an adjoining room.

Almost afraid to breathe, Andrii Dobrelia tenderly kissed Timur’s head and whispered to him. As the newborn calmed down on his father’s chest, tears came to Andrii’s eyes.

As the war reaches the six-month mark, Tsyganok and his colleagues says they have a more hopeful reason to stay.

“These children we are bringing into the world will be the future of Ukraine,” says Tsyganok. “I think their lives will be different to ours. They will live outside war.”