“Inclusivity, diversity, no gender binaries — he was the first one,” said Olivier Rousteing, otherwise known as the creative director of Balmain, ticking off the issues at the forefront of identity politics.

He was talking about designer Jean Paul Gaultier, who retired from his eponymous house in 2020. Since then, a rotating cast of guest designers has been invited to try their hands at reimagining the brand’s couture; Rousteing was the third in line, after Chitose Abe of Sacai and Glenn Martens of Y/Project.

“He was there to fight for all of us,” Rousteing said of Gaultier. The younger designer was practically bouncing with nerves on his giant platform shoes. The collection was, he said, “an open letter of love,” but also “a homage to women, with all the things going on.”

Then he put two molded leather breastplates in the shape of pregnant bellies on his runway.

Still, it’s been a relatively politics-free couture. As the week drew to a close there seemed to be general agreement among designers that the best thing they could do for their clients was to make them feel powerful by making them feel good. Though what that meant depended on who was doing the designing.

For Rousteing, it meant mostly statement pieces with a knowing visual punch and a smattering of insider references (spot the Gaultier-isms!). There were nods to Madonna’s 1992 appearance at an AMFAR gala in bare-breast pinstripes, as well as the designer’s signature marinière rendered in a striped knit made from feathers and descending into an enormous train, and a denim gown sprouting such elaborate feathers they could only have been made by the atelier that serves the Moulin Rouge. Also menswear, which opened the show and was a mash-up of tattoo prints, Breton stripes and faded denim and was notably cool.

Even the bottle and packaging of Gaultier’s famous fragrance, Le Male, became a striped glass corset and aluminum-can mini as well as a silver gown that came with an unfortunate hobble skirt (metal, it turns out, may be great for entrances and Instagram but not so much for walking).

For Kim Jones at Fendi, it meant the lavishly simple: a double-breasted plush caramel pantsuit with a bit of swing; a tunic ’n’ trousers pajama set entirely beaded to look like Art Deco denim; a floor-sweeping tank dress that looked dip-dyed in earth but was actually encrusted in bugle beads. One bias-cut turtleneck dress was spliced together from slices of kimono silk, to create a most elegant patchwork. The overall effect was grounded in the best possible way.

And for Guram Gvasalia of Vetements, it meant getting very personal. Gvasalia co-founded Vetements back in 2014 along with his older brother Demna (now creative director of Balenciaga and no longer involved). But until recently his official role was behind-the-scenes as chief executive; the physical show this season marked what he called his coming out party as a designer. 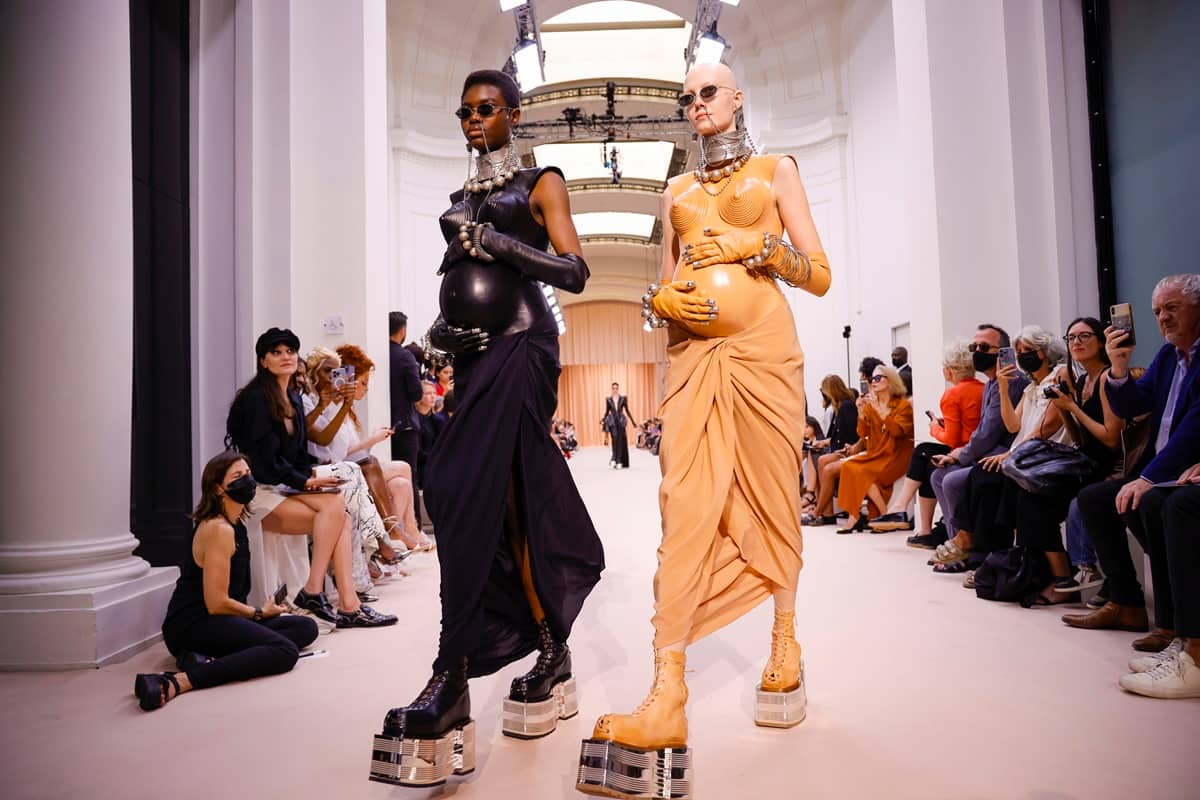 The collection was, he wrote in his show notes, “a summary of my childhood memories, war trauma, hidden desires and twisted imagination.” It was also ready-to-wear, rather than couture; think of it as couture-ish. Just as the result was autobiographical-ish: the story of his family’s flight from the country Georgia, his sense of displacement and attempts to stuff himself into (and then break out of) acceptable social shapes.

An old teddy bear became a teddy coat with another coat stuck onto one side; Barbie dreams became a squishy soft Malibu Barbie pink trouser suit and overcoat. There were zebra stripes inspired by his grandmother’s wardrobe and grandly shredded jeans; supermarket carryall-plaid trench coats with matching pants, and boudoir ruffles. Some major tailoring. It had energy and the raw edges associated with the brand. Not just because the collection was shown in a decrepit space in a notoriously rough area of town, but because it touched a nerve.

Yet it also had familiarity. This is, after all, the vernacular Vetements established when it was first thumbing its nose at the fashion establishment, and which Demna has further publicly refined (and claimed) at Balenciaga.

Given that the two men share the same background, it is perhaps not surprising that they still share a similar aesthetic, but for Vetements to thrive on its own it needs to move in a direction of its own. Now that Gvasalia has put his psyche on the line, maybe it can.

Otherwise, like Rousteing offering his take on Gaultier’s work, it risks looking as if someone else did it first.